Hi, I’m Arimia. I’ve been learning digital marketing ever since my first commercial game, That Which Binds Us, didn’t sell as well as I expected. Nowadays I do social media management at Studio Élan as well as my own studio Crystal Game Works. I get asked a lot how new devs can promote their indie game and the short answer is “post interesting images consistently” but the long answer is, well, much longer. When does a new dev start posting? Where do they post? How do they post?

This series will be long. Treat it as a guide book. An advice list. Take some parts as solid rules and others as ideas you can mold into your own style. Figure out what works best for you and your game as you learn. Let’s get started.

Let’s talk about your game.

Before you make your first post, let’s talk about your game. Tell me about it.

Make sure you know your game so you know how to explain it to people. When posting online, you want to convey to people what your game is and why they should play it.

To give you an example, here’s each of the bulleted points answered for my murder mystery visual novel, Drops of Death.

Before picking out a social media site to use, consider where your game will be released on. Twitter is both a PC & mobile platform while Instagram, Amino and TikTok are mobile-first platforms (with less emphasis on PC). While you can still post about PC games on places like Amino, you’ll get more mileage if said games are available on mobile as well.

Here’s some things you can set up in advance for your future posts:

Who will play your game?

We can’t pick a social media platform to jump on just yet! Who is your audience? Where are they? Let’s do some lite target marketing tests.

Find a handful of games similar to the one you’re making.

These can be games that have similar aesthetics, mechanics, level of polish, story genres, and more. One way I do this is I’ll search through VNDB (the Visual Novel Database) and look through tags similar to my visual novel. You can also ask friends and players- “hey, does this concept remind you of anything”.

While researching Drops of Death I looked through VNDB’s otome tags and other tags to see similar visual novels. I also asked several people who frequently play visual novels if they had seen a concept like it before and if not what they’d like to see from it. Because I’ve worked on otomes before I knew that I needed to post weekly on the /r/OtomeGames self-promo thread as well as use #otome on Twitter and Instagram.

After you have a handful of games similar to yours, you can do more research! Google the games, see where people are talking about them, look at how they post on social media, figure out what they did good and what they could have improved on. Later on after your game has playable builds you can search for YouTubers who played these games, but that’s for way on down the road.

Find out where people talk about games of the type you’re making.

Whether you’re making a rogue-like dungeon crawler or an otome dating sim, find out where people talk about this type of game. Is there more discussion on Reddit than on Instagram? How do other games like yours share their news on Twitter and Facebook? This research stage can take a while- relax, take it easy. Jot down a few notes, go down a few Twitter rabbit holes. This step should be started before you begin posting but you can do market research at any time.

Some things you can take notes on/compile lists of:

When do you start posting?

Okay, so you have a somewhat solid idea of what your game is about and who might be interested in it. …But when do you start posting? What if you start too early? Too late?

Take a breath. Time is relative to however long your project is, so I can’t give you, the silent reader, an exact answer, but I can try to comfort you.

If you have no content right now, then wait. Build some up, have a backlog of concepts, mock screenshots, devlogs, quick prototypes, etc. For a list of post ideas you can check out my article here.

If your development pace is at the speed where you can produce new content every week or so, start now. You don’t have to post daily- you can post once every few days, whatever fits your schedule.

Personally, I post 4-6 times a week- I have multiple released games as well as 2 in development so I almost always have something to post. I wait until I have finished character art to announce new games so that I have concept art, character art, and more to work with.

One last thing before we dive into platforms- there are some terms we need to go over! There’s a handful that you need to understand in order to measure how effective your marketing is.

Impressions: the amount of times people could have seen your post, such as how many times it appeared on people’s feeds, search results, and more (this number will be bigger than views)

Views: the amount of times people have seen your post

Engagement: the total amount of people interacting with the post after they viewed it, which includes liking, replying, and more

Engagement rate: the ratio of people engaging with the post versus impressions (or views, sometimes)

Finally, we can talk about making your first account. By now you should have a clear idea on what your game is about, what platforms the game will release on, and who your target audience is. Keep these things in mind when picking which platform to start off with.

Each platform has different users, different mobile/PC/console preferences, posting styles, and more. Pick one that best suits your game and posting style! I’m not going to tell you which to pick but rather I’m going to list out some things to be aware of on each platform including posting recommendations. 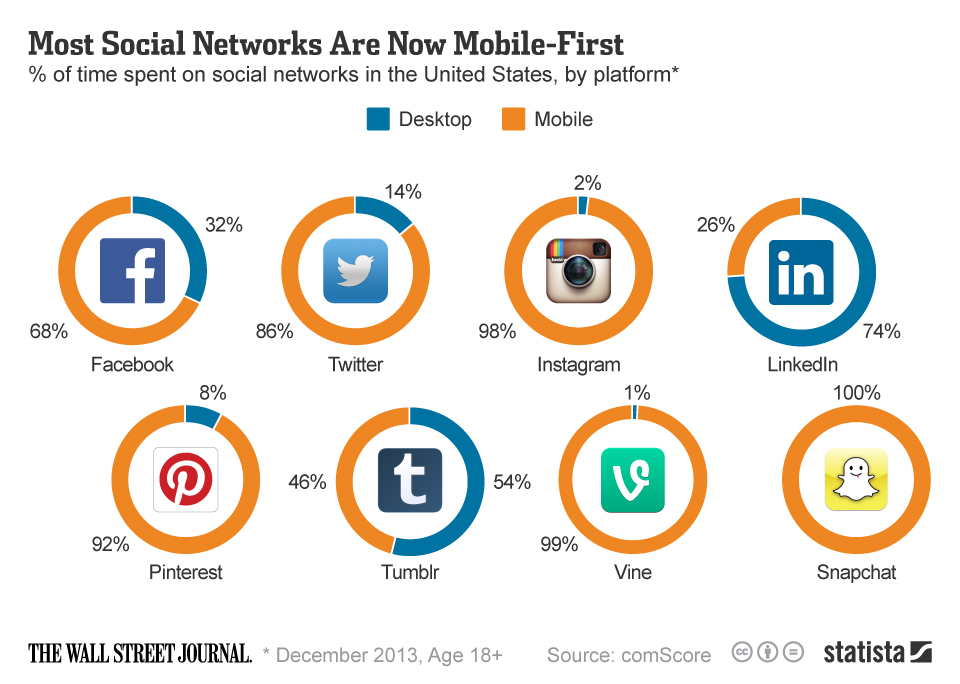 You will find more infographics at Statista

For example, this chart from Statista in 2013 shows that most people use social media on mobile rather than desktop. Keep in mind this is over 7 years old but it should still give you an idea of how mobile a lot of platforms are. 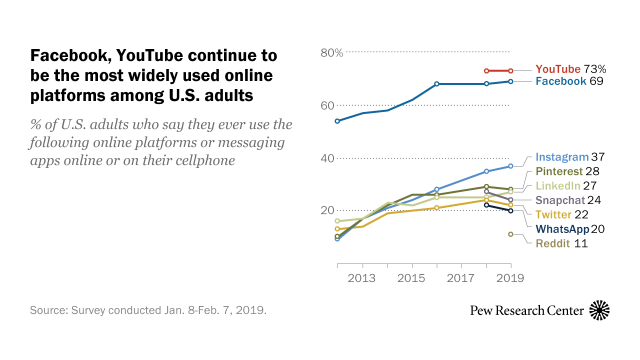 One more statistic- according to the a survey conducted by Pew Research Center, YouTube and Facebook are the most widely used platforms for adults in the US. You can also see where other sites rank on this listing.

One last pitstop before we go into different platforms deeper- what is a marketing funnel and why should you care about it? A marketing funnel is the series of steps a person goes through to go from finding out about your game to being an avid fan who has purchased it.

A comprehensive marketing plan includes processes for targeting potential players at every step of the funnel- how will you catch the eyes of people who don’t know about your game? How will you push people to go from considering your game to downloading it?

Each of your social media channels should be addressing at least one area of the marketing funnel. You might target the Awareness stage on Reddit while on Twitter you target people in the Consideration stage. Whenever you make a post, think about which area you’re making it for! Is it for people who’ve never heard about your game? Is it for people who have played it but want to see updates?

Over the next few months we’ll take a look at various social media platforms and how they operate. Click the banners below to read the articles as they’re posted!