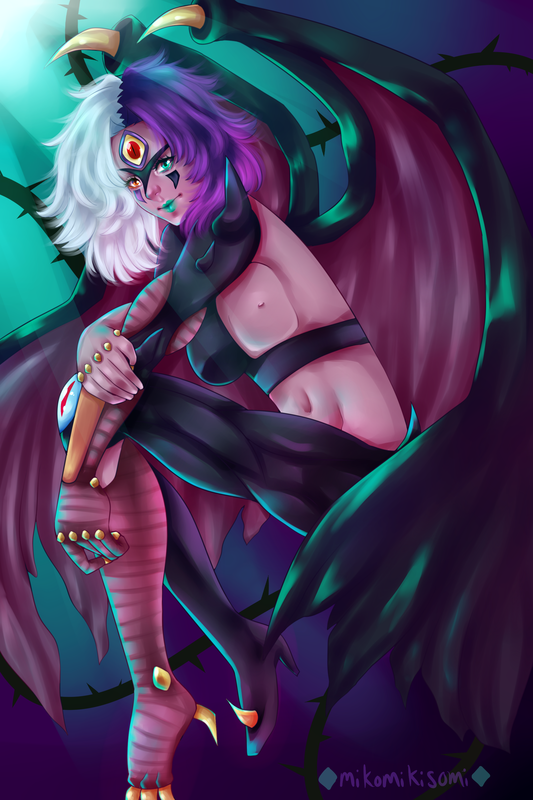 Twitter can be a great place for easily getting the word out there-
​but only if you know how to use it right.

According to Statista, in 2018 Twitter has had on average 335 million active monthly users. That’s a lot of potential consumers, but that’s also a lot of potential competitors, all vying for the same attention. Marketing nowadays is essential to get your name out there, and Twitter offers an easy and mobile platform for sharing your creations- yet, many people don’t fully utilize this in the right ways. So, let’s go over some basics on how to best utilize Twitter for marketing your games.

Tweetdeck is sort of an official extension of Twitter which gives users more content feeds to shift through, the ability to manage multiple accounts at once, and the ability to schedule tweets. The last two are the most important parts of this, as it allows you to schedule tweets for any time in the future for multiple accounts. This comes extremely in handy when weekly date-based events on Twitter happen so that you never forget to post. Let’s look at some of those below.
​

When on Twitter, you only have a second or two of people’s attention- sometimes, not even that. In order to keep their attention, you need to have something that they want to see. The best way to do this is to post something visually stunning, or at the very least, interesting. We don’t all have AAA budgets- if we did, nobody would be reading this. So, what counts as “good”, eye-catching content?

A lot of times I’ll see people tag their tweets but use extremely out there tags that nobody would look up. The idea behind tagging something is that you want to use the tags people most look up and would search for– using tags of random words that somewhat relate to your game does not help you. So, how can you find tags people are searching?By using RiteTag, you can easily find what tags are most popular and which ones people are actually using. At the time of writing this, this is what it shows me are the stats for when I searched “gamedev”: 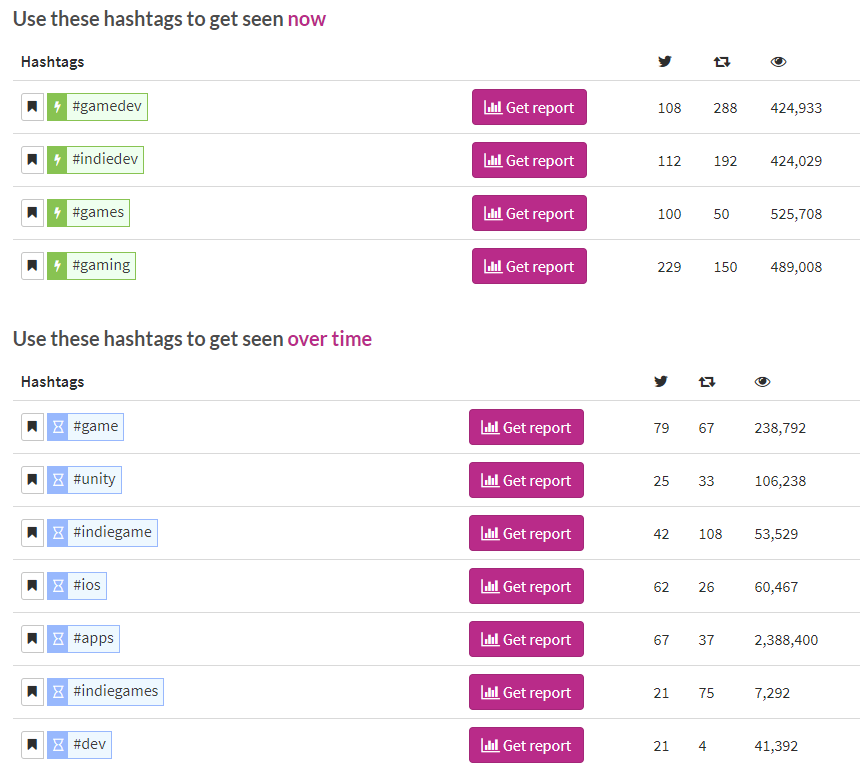 Alright, so now you have a good amount of tags that are relevant to your tweet that has a gif, a screenshot, just something nice in it. How many tags are you going to use?It’s a fact that tweets that use upwards of 13+ tags look bad. I don’t even have to cite that. Just look at them. It’s also a fact that some bots will not RT tweets that have more than a certain amount of tags– some give you 10 tags before they won’t RT you, some give you 7. Now, when I say “bots retweeting you”, don’t take this a bad way. You want some bots to RT your content, as there are a fair amount of game dev bots out there that push your content out to more people, they just happen to be automatized. So, let’s pick out about 5 tags to use at first (though some studies say that using more than 2-3 decreases your visibility- your mileage may and will vary, so I advise to use between 1 and 5 tags and see what works best for you). Here’s a good list of general game dev tags:
​

Twitter is a social media service. Duh. But, because of that, that means there are times when more users are on than others, and there are dead times when much fewer people are on. Posting in these peak times is a great way to get your tweet noticed much easier.Different sites say different things, but the median time seems to be around lunch time to 3PM for the US, so around 11AM-3PM CST. If you noticed, that’s also right in the middle of #indiedevhour . Make sure to schedule your tweets for during these times.
​

7. Bringing it All Together

Marketing is an art. Like with any art, we can learn through practice and through others, but sometimes things just work and we can’t really figure out why they work versus something very similar. You will find that some of the tweets you’ve painstakingly crafted for maximum exposure only get some attention while others that don’t look as nice will get 3x as much. Just keep trying, and figure out what works best for you. For me, these steps above have worked best, so use them as a guild line and tweak as necessary.For this last bullet, I’ll show some of my tweets and go through how I make them.

That Which Binds Us is now RELEASED on Steam & @itchio with a discounted launch price of $8.09!

What if you could make someone forget all about you?

This was the announcement tweet for my first commercial game, That Which Binds Us, being released on Steam and Itch.io. Let’s go through each line and I’ll explain my reasoning for each part.On the first line, we have a simple but easily understandable declaration- the game is now available for purchase on two websites and has a discounted launch price. There’s not a lot of text surrounding it so you can quickly read what it says.

On the second line, there’s a short logline for the game that entices people. Well, what would you do? It’s short but effective.

On the third and fourth lines I have an emoji, the website name, and then the website link. The emojis are my own personal touch of flair- it makes it so the entire tweet isn’t words and adds some color to it. For tweets about That Which Binds Us, I use three emojis that are represented in the game- the heart with a bow on it, a ribbon, and a knife. You don’t have to go nearly as indepth with this thinking as I do, but it’s a good idea to consider. The links are not shortened URLs so the user is able to easily see that they lead to the correct websites.

On the last line I have, again, a relevant emoji and 5 tags. Emojis count for 2 characters so by the last ribbon I had used every single character Twitter allows for this tweet (talk about a close one). I used tags relevant to my tweet, ones that I knew were most prevalent.

Lastly, the media I posted on this tweet was a screenshot. For the release tweet I wouldn’t advise this- you should use the most eye-catching media you have such as the key visual or a gif of ingame play. Still, it worked out pretty good for me with just the screenshot.
​

Hi #indiedevhour !
We have a new sprite from our story-heavy RPG, Asterism! This is V, the mysterious girl our protagonist meets on the subway.

I’ll go through one more tweet before ending this- this is a much quicker but still effective tweet, one that I sent out for #indiedevhour (I find that posting my sprites gets me the most mileage for #indiedevhour , so I save my screenshots for #screenshotsaturday – of course, your mileage may vary).First line I state what it’s for- #indiedevhour . Naturally. I enter after this so as to not have a big block of words.

Second line says what the art is for- it’s for my RPG. The next sentence gives a small bit of info about her, how she’s a bit of a mystery. The art should entice people to stop for a second or two, long enough to read the short sentences.

Lastly of course I have emojis and tags. I could have added a link to something in this tweet inbetween the info and the tags, such as a link to our Discord or more information about the game, but I didn’t for this one. As you’ll see, there’s not too many blatantly wrong ways to market on Twitter unless you’re spamming tags and trying to get every single bot on the website to RT you. It’s all about finding your own way to post content that most entices users to stop, and this is my method. I hope some of you are able to learn from this method and tweak it some to make it your own! 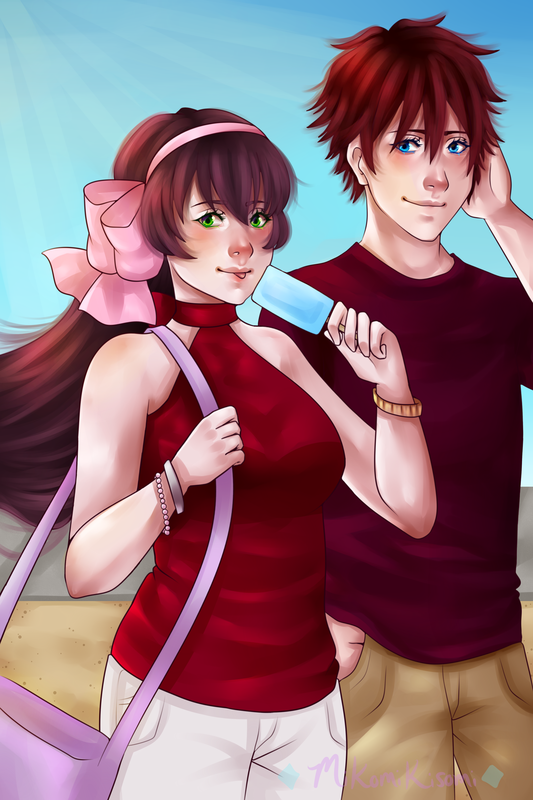 Sometimes you come face to face with ghosts from your past.

Another Ludum Dare finished, and in record time. This event I present to you I Saw Him Today, a short, emotional, and experimental visual novel made in Ren’Py. It’s a heavy story that doesn’t easily become resolved, but I hope this realistic setting helps open people’s eyes to how many different kind of people are out there.